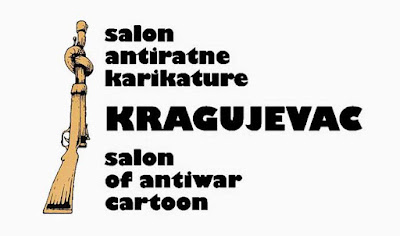 In memory of the severe crime that happened in Kragujevac, in 1941, 80 years ago, the German occupier’s forces executed several hundreds of innocent civilians in just one day, also sincerely wishing peace to may prevail in the world, especially today when it sinks into the abyss of the world war Memorial Park “Kragujevacki Oktobar” is announcing

The international jury will make a selection out of

submitted cartoons that are to be exhibited and

published in the Salon‘s catalog. Besides, the following prices are to be awarded:

Grand Prix “Courier of Peace” and a prize of 1,500 euros from the International Association of Cities of Peace Newspapers.

A bronze plaque and 500 euros.

Award of the Mayor of Bydgoszcz (Poland) in the amount of 750 euros.

Award of the city of Ingolstadt (Germany) in the amount of 500 euros.

Award of the city of Bielsko-Biala (Poland) in the amount of 500 euros.

Prize of the city of Siren (France) in the amount of 500 euros.

Prize of the city of Pitesti (Romania) in the amount of 500 euros.

Award of the city of Carrara (Italy) in the amount of 500 euros.

The jury may also award a number of diplomas to shortlisted works for awards.

Cartoonists and fine artists from all over the world have to right to participate.

They should submit at most 3 (three) cartoons, which have not been awarded by any other international competition, on the subject of antiwar as well as solidarity between people and nations.

The artworks should be utmost A4 - A3 formatted, while art technique is at the artist’s choice, including, electronic version of the cartoon with the original signature.

On the back of the artwork, there should be written data on the artist (such as:name, surname, address, phone/fax, e/mail.)

The deadline for submission of works is August 17th, 2021.

The Cartoons should be sent to the address:

Or to the e-mail address: salon@spomenpark.rs

The works submitted to the competition are not returned and the Salon reserves the right to use them without special compensation.

NOTE: The International Salon of Anti-War Caricature had a great international promotion and affirmation. After the announcement of the winners, the presentation of awards, and the opening of the exhibition in Kragujevac, the Salon exhibition is being set up in numerous cities around the world and in international organizations.

The salon has visited more than 40 cities in 20 countries.