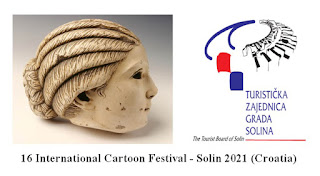 1.PARTICIPATION - The organizer of 16th International festival of cartoon Solin 2021.Is the Tourist Board of Solin and City Solin. The festival is opened for everyone regardless of nationality, age,sex, or profesion.

ENTRIES Conditions of entry: 1.  Original works and digital artworks will be accepted. Digital artwork is to be numbered in pencil on the front and pencil signed. In addition to the original works, works in electronic form, A4 size, 300 dpi, jpeg are also acceptable.

2. Work may be black or colored.

3. There should be the name, surname and the address on the  reverse side of    cartoons.

4. Maximum 5 entries will be submitted.

6. Works may not be awarded at  other festivals.

(Format: JPEG; Size: A4; Resolution: 200 dpi-300 dpi). Maximum 3MB for a digital work.
Name of digital work: name.surname.country.number (if the autor is submitting more than one work)

CARTOONERS WHOSE WORKS ENTER THE FINALS WILL RECEIVE AN ELECTRONIC DIPLOMA

7.EXHIBITION - The exhibition will take place in the galery of the culture home „ZVONIMIR“ Solin on the 17.09.2021

8.OTHER CONDITIONS - The organizer reserves the right to reproduce the works sent to the festival, Solin 2021,as the advertising material without being obliged to pay a fee to an author whose work may be used.The prize-winning works become property of the organizer. 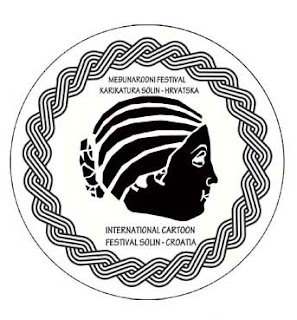 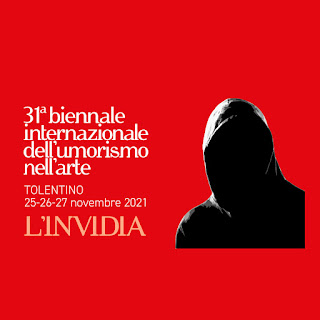 The Municipality of Tolentino announces and organizes Biumor 2021 the  31st International Biennial of Humor in Art , a prize competition dedicated to the art of humor.

The competition is divided into two sections:

1 - " International City of Tolentino Prize " dedicated to the art of humor on the theme  "Envy" .

Envy  is the desire for the evil of others.

Envy  is the displeasure we feel for the satisfaction of others.

Envy  is the grudge for the successes of our fellow men.

Envy is that interpersonal and social malaise that continues to survive in contemporary society.

Envy (from the Latin in - aversive - and to see, to look against, unfavorably, or precisely to look badly) is a constant of the human soul, a timeless phenomenon that crosses all social groups. The theme is an invitation to think critically about the evil present in our relationships

2 - “ Luigi Mari Award ”, dedicated to the caricature portrait of famous people. As part of the award ceremony, the “Humor on the Net” will be recognized,  dedicated to new postmodern products that break the consolidated models to which traditional comedy has accustomed us.

·         a selection of the works received by a qualified jury. The selected works will be exhibited at the 31st International Biennial of Humor in Art, an  exhibition to be held in Tolentino from 25 November 2021 to 30 January 2022;

·         the publication of a catalog of the selected works, which will be given as a gift to the authors of the same;

Contemporary artists of all nationalities can participate in the competition, without age limits, with a maximum number of three works for each section, unpublished and in original, of free dimensions and techniques, in any form of visual art and any type of material and support: painting, graphics, sculpture and installation, photography, video. Works of digital art entirely made on the computer and works made from photographic sources are also allowed as long as the digital intervention is structural, only if also sent in hard copy, signed and numbered by the author

The deadline for admission of the works to the competition is 11 October 2021 . By that date, all the works must reach:

Each author must attach the participation form, completed in every part and duly signed. Each work must be  signed in original  and accompanied by the appropriate coupon.

The works must be sent carriage paid. The works sent will be accepted only if they are not burdened by taxes, customs duties, any other burden borne by the Municipality.

The admission of the works, their selection for the exhibition and the awarding of the prizes are the exclusive competence of the Jury appointed by the Municipal Administration of Tolentino in agreement with the Artistic Direction. The jury's decision is final and unappealable.

The Jury will award the following prizes:

Other special prizes  may be awarded by the Jury.

The winning works will not be returned. They will remain the property of the Municipality of Tolentino and will become part of the collection of the MIUMOR - International Museum  of  Humor in Art .

The works expressly donated by the Author  will remain the property of the Municipality of Tolentino, which may freely dispose of them.

The non-donated works  can be collected personally by the artist or his delegate from the MIUMOR starting from February 28, 2022 or they can be returned if the interested party expressly requests it on the coupon attached to the work, not earlier than the thirtieth day following the expected one. closing date of the Biennale, except for extensions.

The Municipality of Tolentino, as organizer of the event, ensures the utmost diligence in the custody and surveillance of the works for the entire duration of their stay at the Biennale headquarters and during the transport phases of the works themselves, however declining any

responsibility for any theft, fire, damage or loss due to imponderable causes that may occur.

ART. 8 - USE AND REPRODUCTION OF WORKS

Each participant in the competition grants the Municipality of Tolentino the reproduction rights of the works selected for their publication in the official catalog of the Biennale free of charge, in the number of copies that the Municipality deems convenient, for publication on the website and any other form of communication, promotion and activities of the organization.

The Municipality is authorized to publish the work on any medium, including for commercial purposes. The author will be indicated in the reproductions of the work, in the methods of use. The author allows the free use of the work for cognitive, educational, recreational and public enjoyment purposes.

The author of the published work expressly waives any compensation.

The Municipality of Tolentino, as organizer of the 31st Biennale, has the right to make a final decision on anything not specified in these Regulations.

The Regulations are published on the website  www.biumor.com in Italian, English, French and Spanish. In the event of a dispute, the Italian text will prevail.

Participation in the competition of the  31st International Biennial of Humor in Art  implies the unconditional acceptance of all the articles of these Regulations. 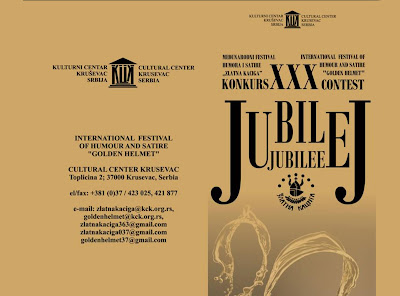 ONCE AGAIN WE ADMIRED THE NEW YEAR GREETINGS by Peter Závacký

The original New Year greetings - New Year's cards - which were born once in Victorian England (18th century) are now not only small - funny, smiling, comic to absurd paintings of artful paintings from the studios of painters and graphic designers. Traditional symbols of alternating years - old and new - farewells and welcomes - in the period from Advent, the Three Kings until the third decade of January have become indispensable messengers of good news - wishes of health, happiness and achievements, personal, family and work.

Today's famous New Year greetings - such as small, paper paintings - with Christian attributes and the symbol of winter - eaters decorated with snow duvets, winter landscapes and animals were created /i.e. on the islands to order thanks to rich and wealthy families.

They soon appeared in the old Europe and penetrated the then Russian Empire.  And their insever was found. In Prague, the painter Viktor Stretti - the first - enriched his own New Year's paper congratulations with a written supplement P.F. - "congratulations - to happiness" in the form/form/ of two French words "Pour Féliciter". His idea, his grandson, his abbreviated, only two-song form of the magically magical acronym "P.S." have preserved the New Year's to this day.

They have gradually spread beyond the continent - into the world. Today, inherently, at the turn of the year - thanks to the emergence of the postal service, the world is ingesting on all continents. From America, Africa to Australia. It's the third century.

WE ARE PLEASED THAT...

"The alternation of years is now popular with painters on all continents. It is a welcome and spectacular opportunity for artists (mainly thanks to e-mail now/ their virtual presentation - to present their author's works - New Year's works", says Peter Závacký, curator of cartoon from Bratislava.

" And not only for painters. But also for their fans and fans of fine art. They all have a great opportunity to see their likable artwork every year in a variety of art techniques. From classic 'repro' postcards to fine opus. Funny and smiling drawings and paintings. Engraving and lithograph graphics, collages and photo collages, also PC-techniques. All great art-works from leading, well-known and popular painters and cartoonists. Authors of domestic and also from the world, countries close and distant - cartoonists, painters, graphic designers, cartoonists. But today also artists from the ranks of poets and writers /with a gift to draw/, who also added a verse or an aphorism or , an epigraph. They all visually please their eye together and caress their souls," added curator Závacký.

"Satisfied smiling and faces at my recent exhibitions in Slovakia and the Czech Republic - exclusive presentations of international art - cartoon project "ART TRIBUTE To "PF" "they are for me this kind and joyful proof."

And there's something else I want - as the author - to say - to add. Why hide it. I'll be proud to say that. When drawing, painting and drawing new year's books, they always have solo (long since/ cartoonists). Masters of humor in graphics - an art humorous acronym. They draw quickly, in a flash. Excellent. And they also think fast - but especially wisely, warmly, honestly and thoughtfully. Cartoonists discover the hidden truth. They're like kids - they don't lie...

Despite the unplanned virus, the artists didn't rest and didn't start lazy even now - when the years were alternating - 2020 and 2021 - they drew, painted, engraved, christianized - they made their kumštom a great fan. But they also delighted themselves and stroked their egos. On merit.

Moreover, for more than a decade now, New Year'saries are also the subject of passionate collecting interest. With us, in Europe and in the world. Especially artistic New Year's pieces from the studios of recognized masters of palette, brush and engraving are searched.

Also let us be satisfied by the realization that this beautiful habit of sending you to the new year "PF" he didn't lose any of his magic. Not for centuries. Miraculously, it was preserved even at a time of dominance of sms and e-post.

It is therefore very timely to recall the strength of this rare long-standing tradition in the new year and habit with us - the elderly - on our favorite and watched portal of the  Master OSVALDO MACEDO DE SOUSA.

From the quantities of New Year's orders from friends from my post PF 2021 I have selected for you, if you will allow, at least "dear" ONE LARGER DOZEN, small but also large and original smiling works of art - New Year's - in the form of this Mini-Exposition ART TRIBUTE TO "P.F. 2021 " from friends and recognized masters of humorous visual acronym - in our country and in the world - from the Danube River and the Vltava River, but also from the Amazon, Nevy - Rivers, Bosphorus and The Wall of China...  namely Jozef Jurko, Jozef Hudák, Jozef Grušpier, Stano Remeselník, Lubo Radena, Rasťo Visokay /Slovakia/, Lubomír Vaněk, Jitka Dolejšová, Miroslav Šesták, Maria Plotěná, Pavel Matuška /Czech Republic/, from Greece Katarína Yourčková... Spaniard Manuel Junco, Frenchman René Bouschet, Brazilian Amorin, Russian Vasily Alexandrov, Belarusian Oleg Gutzol, Chinese Zhu Chen and Turk Hasip Pekta.

Art - the art of New Year's art is accessible to every artist across continents. Professionals - painters and cartoonists, amateurs without art education, who draw only for their own pleasure, or with the hope of provoking a smile on the face not only friends. As well as competitive and non-competitive presentations of cartoon humour from Merida to Vladivostok, from Murmansk to Johaneburg, from Sydney to the Easter Islands..

As always, you need to start from what is the simplest and at the same time the most interesting...