13th INTERNATIONAL CONTEST OF CARICATURE AND CARTOON OF VIANDEN 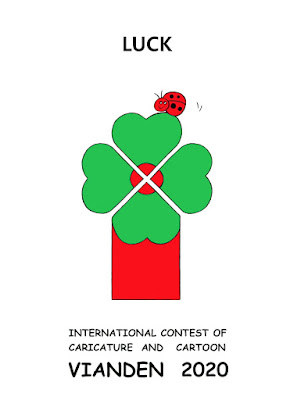 The Museum of Caricature and Cartoon of Vianden with the cooperation of
Les Amis du Château de Vianden and Naturpark OUR
are pleased to announce their
1. Subject: LUCK (chance, hazard, good/bad fortune, destiny…)
2. Deadline: 30 March 2020
3. Prizes:
1st prize:1500 €,
2nd prize: 1000 €,
3rd prize: 500 €,
3 honourable mentions
4. Entries: Each participant can submit up to 4 entries in digital format by sending them via internet to the following address: cartoon@caricature.eu. The author must include the following details in his or her e-mail: first name, last name, complete address, e-mail address, phone number and the title or the number of each submission. The specifications for these electronic submissions are as follows: format JPEG, good quality, and max. 1, 5 MB per picture. Out of these submissions, will be made a selection of 70-120 drawings. Only the awarded artists will be invited to send the original work by mail. All these works will be shown as prints at the exhibition and in the catalogue. Their size should be between A4 (210x297mm) and A3 (297x420mm).
5. Technique: Free, black and white or in colour, without subtitles.
6.Prizes and Exhibition: The announcement of the prizes and honourable mentions will happen on 2thMay 2020 in Castle of Vianden and the exhibition will take place in the Hall of the Knights of the Castle of Vianden from 3th May until 24th May 2020. There are plans to display the exhibits in the Museum of Caricature and Cartoon of Vianden and in other cities or country.
7. Returns: The drawings that were awarded one of the prizes will become property of the organizer.
8. Catalogue: The authors whose submissions are selected for the exhibition will receive a free catalogue by mail.
9. Results: The results will be published on the website www.caricature.eu on 3thMay 2020.
The award winners selected by the jury will be personally informed via e-mail or by phone. The final decisions of the jury are incontestable.
10. Copyright: The selected participants give the organizers permission to use their drawings only for promoting the artist and the event itself. Every other aspect of the copyright remains with the artist (except for the awarded submissions). It ensures that the awarded works can no longer be submitted in other contests or published by their authors or third parties after the official publication of the results.
11. Generalities: The submitted work should not have been awarded or published before the deadline of this contest. By taking part in this contest the participants accept the abovementioned rules.
12. Submission address for the awarded works: Musée de la Caricature et du Cartoon de Vianden 48, Grand-rue, L - 9410 Vianden, Luxembourg
13.Further informations cartoon@caricature.eu 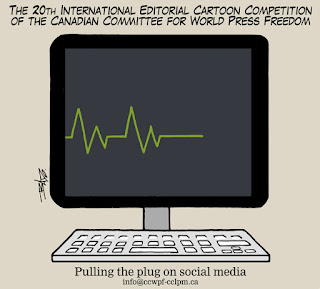 Here are the rules and regulations:
1. The theme for the 20th International Editorial Cartoon Competition is:
Pulling the plug on social media
After a storm over the publication of a cartoon deemed anti-Semitic, the New York Times stopped publishing editorial cartoons in their international publication.
In August, India stripped Kashmir of its constitutional autonomy and isolated it from the world by cutting it off from the Internet.
Thirty years after the fact, the Chinese are still kept in the dark about the Tiananmen Square massacres.
Iran can claim, without risk of contradiction, that its response to the attack on General Soleimani killed 80 American soldiers.
Increasingly, we see that the powers in place do not suffer contradiction.
2. Three prizes will be awarded: a first prize of $1500 plus a Certificate from Canadian UNESCO, a second prize of $750 and a third prize of $500. All sums are in Canadian dollars. Ten additional cartoons will receive an ‘Award of Excellence.’ Regrettably no financial remuneration accompanies the Awards of Excellence.
3. Only one cartoon will be accepted from each cartoonist. It may be either in colour or black and white and must not have won an award.
4. The size of the cartoon should not exceed A4; 21 by 29.2 cm; or 8.5 by 11 inches. Cartoons should be in jpeg format at 300 dpi.
5. The name, address, telephone number and a short biography of the cartoonist must be included in the submission.
6. The Canadian Committee for World Press Freedom shall have the right to use any of the cartoons entered for promotion of the Editorial Cartoon Competition.
7. The winners of the Cartoon Competition will be announced at the World Press Freedom Day luncheon to be held at the National Arts Centre in Ottawa on Tuesday May 5, 2020 and will be advised by e-mail. The winner’s names and their cartoons will be posted on the CCWFP web site.
8. The winning cartoons will be published in a program distributed at the luncheon.
The deadline for reception of cartoons is midnight (Eastern Daylight Saving Time), Friday, March 27, 2020.
Send submission by e-mail to: info@ccwpf-cclpm.ca https://www.artsy.net/article/alina-cohen-mexican-modernism-relevant 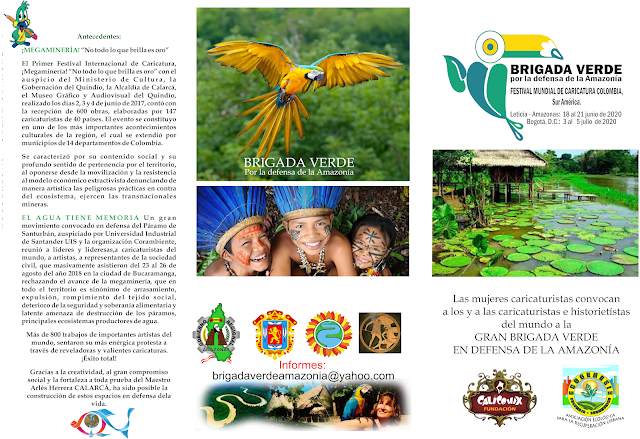 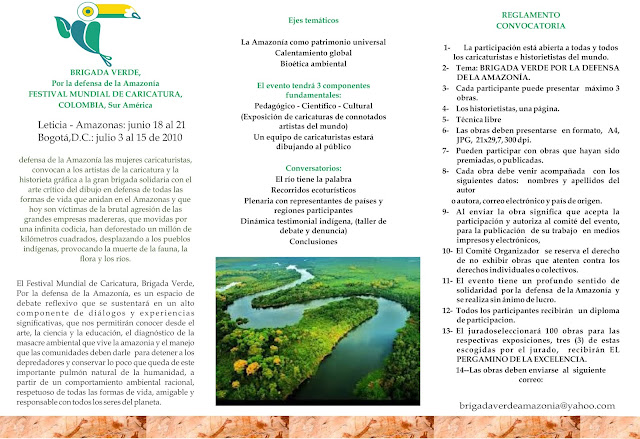