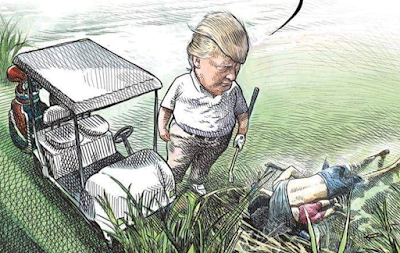 Michael de Adder is the author of the image that was not published in the press, but was disclosed by the same in social networks, where he also revealed, via Twitter, that several American and Canadian newspapers canceled their collaboration.
The cartoonist said on Twitter that the various newspapers in the eastern province of New Brunswick had dismissed him, but he did not explicitly attribute the publication's decision to the release of Trump's cartoon.
In the image, the photograph of Oscar Ramirez (25 years old) and his daughter, Valeria (23 months), who died drowned when they clandestinely crossed the Mexican-US border, are replicated, but the cartoonist puts Trump, next to a golf cart , to watch the corpses and to ask: "Do you mind if I continue to play?"
The shocking photograph of the bodies found in Rio Grande was disclosed in the international press on Wednesday.
In early June, the American newspaper The New York Times announced that it has decided to end the publication of cartoons in the international edition, following the controversy involving a cartoon by the Portuguese cartoonist António, considered an anti-Semite.