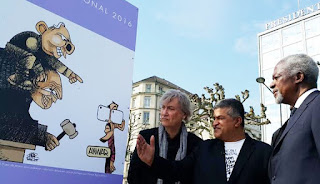 Malaysian Deputy Prime Minister Ahmad Zahid Hamidi says he will leave it to the police to decide whether to take action against Zunarfor exhibiting cartoons critical of Prime Minister Najib Razak in Geneva.  Last week Malaysia’s Communications Minister Salleh Said Keruak said that Zunar’s cartoons targeting the scandal-plaguedadministration of Prime Minister Najib could be considered“economic sabotage.”  Zunar was asked to exhibit his cartoons alongside those of East-African cartoonist Gado after the two cartoonists were presented the 2016 Cartooning For Peace Award by former UN secretary-general Kofi Annan.  The award is presented to cartoonists for “courage, talent and commitment to the values of peace and tolerance — as well as for their fight for freedom of expression.”
Zunar issued a press release in response to the Malaysian government’s new threats:
“For me, these are new plots by the authorities to silence me. For years, I have been subjected to all sorts of harassments and intimidations involving three laws — the Sedition Act, Printing & Presses Act and The Penal Code.
“I was arrested and put behind bars twice and am now facing nine charges under the Sedition Act and facing possible 43 years jail if found guilty.
“Seven of my books have been banned, my office was raided several times, the bookstores and printers were also raided.  Thousands of books and original drawings and printing plates were confiscated, my sale assistants were arrested and so was my online sale manager.
“I would like to reiterate that: talent is not a gift, but a responsibility.  It is a duty of a cartoonist to expose corruption and injustices.  Freedom of expression is not a prerogative of the government, but it is my right!” 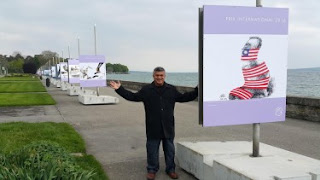 Zunar-with-cartoon-exhibition-in-Geneva
Zunar is past recipient of CRNI’s Courage In Editorial Cartooning Award, the International Press Freedom Award, and has twice been presented the Human Rights Watch Hellman/Hammett Award.
The cartoons on display in Geneva exhibition, including the work of other Cartooning For Peace members, can be seen here.  An educational supplement to the exhibition catalogue can be seen here.
A highly placed Malaysian government official has lashed out at the cartoonistZunar for exhibiting his political cartoons in Geneva.  Communications and Multimedia Minister Salleh Said Keruacsuggested that criticizing Malaysian Prime Minister Najib Razak in a foreign country could be seen as an act of “economic sabotage,” and is part of a plan to “topple the prime minister.”  Zunar responded to the notion of a cartoon coup d’etat: “If a cartoonist can topple the PM, that is not illegal, but hilarious.“
In response to Salleh’s statement that “It is not wrong to have differences in opinion, or to disagree with the government, but why involve other countries,” Zunar reminded the minister that his books of cartoons disagreeing with the government have been banned and confiscated in Malaysia since 2010, and he and his employees jailed and harassed.  Zunar is currently facing sedition charges for a series of tweets. If found guilty, the cartoonist faces up to 43 years in prison.
Along with Zunar’s work, the Geneva exhibition includes cartoons by Kenya-based cartoonist Gado and members of Cartooning For Peace. The exhibition was opened after Zunar and Gado were awarded the 2016 Cartooning For Peace Prize for showing courage in their fight for freedom of expression. The exhibition will run through June 4.
In an open post, Zunar suggested that Minister Salleh might better understand his cartoons by buying the cartoonist’s latest book. “If you are still not clear about my cartoons, you can come to my new book launch [for] WASABI (Wa Sapu Billion) on this Saturday (14th May) and buy one.  No, you cannot buy it at bookstores, because your ‘democratic’ government has banned it. “


Zunar is past recipient of CRNI’s Courage In Editorial Cartooning Award, the International Press Freedom Award, and has twice been presented the Human Rights Watch Hellman/Hammett Award. 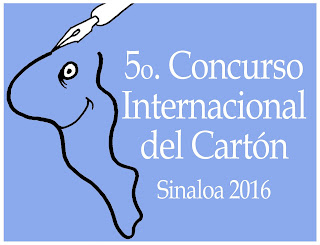 1. PARTICIPATION
The Contest is open to all cartoonists from all over the world and beyond.
2. THEME: ORGANIZED CRIME
More than ever, especially from the beginning of this century, organized crime has become a serious threat to social stability in many countries. In these cases the control organized crime imposes is notorious. Through economical power and physical intimidation it has managed to infiltrate every level of official government. It is responsible for controlling the press and other mass media, even assassinating journalists. It is said that it sponsors political campaigns, buy judges and other important civil servants, including top military officers. It launders huge amounts of money and owns countless “legitimate” businesses.  At times it shows off the weight of its power publicly. Finally, it is deeply involved in drug production, distribution and trafficking, kidnapping, extortion, trafficking in women, terrorism and arms sales, among many other illegal activities.
3. THE PRIZES
1st Prize:  $27,000 Mexican pesos.
2nd Prize: $23,000 Mexican pesos.
3rd Prize:  $17,000 Mexican pesos.
Winners will be notified by e-mail after 1st. September 2016.
4. ENTRIES
A maximum of 3 works can be submitted by E-mail in any media, in black and white or colour, but they should not be currently participating in other contests or have been awarded.
Works should have a minimum resolution of 200 dpi, size 21.5cms x 27.9cms. They should be sent to any one of the following:
camino2@prodigy.net.mx
camino3@prodigy.net.mx
concursosinaloa2016@gmail.com
5. DEADLINE: August 7th, 2016
6. PLEASE FILL IN THE ENTRY FORM AND SEND IT TOGETHER WITH YOUR WORK (The entry form can be downloaded from http://concursosinaloa2016.orgfree.com).
. Name
. Photograph
. Address
. E-mail
7. A catalogue with the winners and selected works will be available on the web page of the contest:
http://concursosinaloa2016.orgfree.com
8. Participants that were winners in 2015 can participate but if they win again they will only be entitle to receive honorary mentions.
9. PROPERTY RIGHTS


Copyright belongs to authors. The Contest will use some works, but only for promotional purposes, such as publicity, the catalogue and the press. 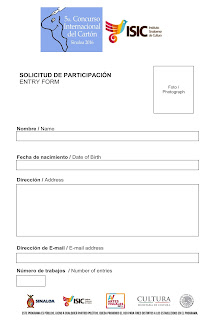 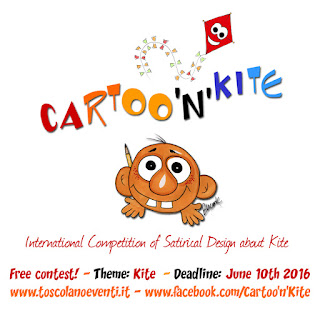 Designers artwork will be exposed in the main salon of "Il Castagneto " in Toscolano, medioeval castle in Avigliano Umbro territory starting june 24th for a week. First and second prize will be assigned by a qualified jury.
You can read the partecipation rules as follows and then unload it, including the partecipation form, clicking on the under placed link.
www.toscolanoeventi.it
Theme: Kites
Deadline: June 10th 2016
Info: satirical.cartoon@gmail.com
Web:
www.toscolanoeventi.it
www.facebook.com/Cartoo'n'Kite

“Cartoo’n’Kite” International Competition of satirical design about Kite
1. “Toscolano in volo”, presents its first edition of “Cartoo’n’Kite” - International competition of satirical design dedicated to Kite
2. The theme of the competition: “Kite”
The artwork must be developed on a single table in the maximum size UNI A4 (cm. 21 x 29.7 – 300 dpi). Any kind of graphical technique will be accepted, including digital artworks if the prints are signed and if they are print number one. Participation is for free, open to artists of any nationality. The artwork must be original, copies will be not accepted. The artwork must not have been published in the past. For minors require a permission of a parent or his representative. Each author may participate with one artwork. If sent more artworks the Guarantee Committee in its sole discretion, will choose the work that will participate in the contest.
A Guarantee Committee - composed of professionals and representatives of the cultural world will select the 30 most significant artworks which will be exhibited at “Il Castagneto” of Toscolano.
The 30 finalist artworks will not be refunded and will remain property of the Organizing Committee. Entries must be sent by e-mail together with the registration form in full, duly completed and signed no later than June 10th 2016 at: satirical.cartoon@gmail.com
The 30 finalist artists undertake to send the original artwork at:
Nicola Bucci - “Cartoo’n’Kite“
Via Nino Taranto, 30 A2/A
00125 - Roma – Italia
The artworks must indicate on the back: name, surname and address of the author.
The artworks will not be refunded. The artworks will be published on the official web sites of the competition. The 30 finalists artworks will be published on www.fieradelvinomontefiascone.it . The Committee will declare the winner of “Cartoo’n’Kite”and it shall have the right to assign any awards and special mentions.
3. The artworks which make it to the final stage of the competition will be exhibited at “Il Castagneto” of Toscolano.
4. Every artist must justify the content of their own artwork. The works that the Artistic Director receives could be chosen for publication, distribution and any type of use . Artworks will remain property of the organizing committee. All the competition participants understand and agree to the terms of the competition stated implicitly here, and accept, without any compensation, the exhibition of their artworks in or more shows in the art exhibition. They also agreed to its publication in books, posters, bookmarks, t-shirts or cute hats, calendars or agendas and on all the information services. It will be obligatory for the name of the artist and the country of origin and of the name of “Cartoo’n’Kite” to be included in every publication.
5. Prizes
“Cartoo’n’Kite” - 300 euro
“Toscolano in volo” - 200 euro
The jury shall have the right to assign any awards and special mentions.
6. “Cartoo’n’Kite while remaining fully committed to the care and protection of the works exhibited , does not take any responsibility for any theft, damage or loss that might occur involving these works from the moment they arrive till the close of the exhibition.
7. Participation in the event which is completely free, implies total acceptance of these regulations. The Organising Committee has the right and the responsibility to give the final decision concerning controversial questions as well as on matters not explicitly provided for.
For further information:
satirical.cartoon@gmail.com
Web: www.toscolanoeventi.it