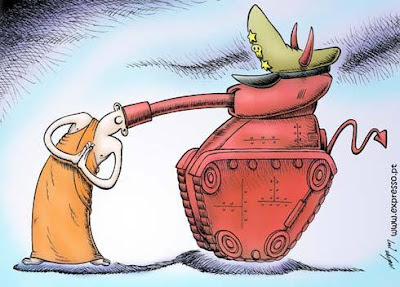 The life of another cartoonist is threatened 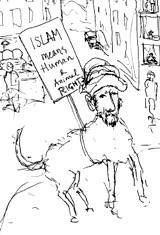 Al-Qaida offered prize money for the murder of Swedish cartoonist Lars Vilks. The artist, who holds a Ph.D. in art science, got into an international controversy after he made images depicting the head of Prophet Muhammad placed on the body of a dog, in July 2007.

“We are calling for the assassination of cartoonist Lars Vilks who dared insult our Prophet... We announce a reward of $100,000 for the one who kills this criminal.” says a soundfile on an Islamic Web site. The announcing Iraqi al-Qaida leader later upped the reward by 50% if the cartoonist was “slaughtered like a lamb.”

Viks' drawings were intended to be shown at a small art exhibition in Tällerud in Värmland, Sweden, but were removed before the opening for fear of violence by radical Islamists. Vilks then submitted his drawings to several other art galleries, including the Gerlesborg School of Fine Art in Bohuslän, where Vilks himself is a frequent speaker/lecturer, but all institutions cited fear of terror and declined to show the images. More on the story, one of Vilks' images, a blog, as well as subsequent public discussion can be found at the Gates of Vienna (http://gatesofvienna.blogspot.com/2007/09/lars-vilks-has-price-on-his-head.htm